I went to Sydney again this weekend and had a chance to see the Sydney Gay and Lesbian Mardi Gras together with a few friends. Never having been to one of these before, I was surprised to see how much it is like the German Love Parade in Berlin or the Rosenmontag in Cologne (though I haven't been to those either), with the main exception that the people on the cars are not idiots but just homosexuals.

There was an extremely wide variety of groups, ranging from political activists to dance acts. There were local associations, political parties, religious and anti-religious groups, highschool kids, animal rights groups, Ikea employees, and of course beautiful dancers of both genders as well as many disgustingly ugly men.

A few people there seemed te be too much of a minority even there so they did not have there own cars, in particular I was missing
I'm totally sure that people from each of those categories and even more unlikely ones were there, so sorry if you were trying to get your message across and I didn't see you. 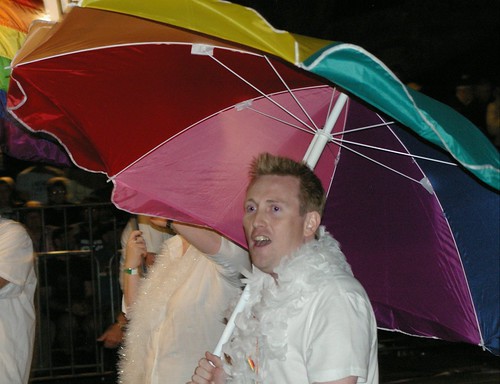 I took hundreds of photos, though most of them didn't work out well because it was hard to get a good view on the parade, but after throwing away most of them, I have a few gems left. Some photos may not be considered safe for work, so I'm not including them directly here. If you want to see them, please follow the link to my flickr page.
Collapse