Asiana advertize the fact that they are the only airline with a five-star rating on Skytrax, and after my first flight with them, I'd agree that they deserve it. The food was the best I've had on an airplane ever. While I'm not familiar with Korean cuisine and had to read the manual they provided with their food in order to know what to do with it, it was fresh, light, tasty and enough food for me.

The entertainment system on their Boing 777-200 surprised me with a snappy user interface and a good selection of recent movies and TV shows, including a Snow Patrol concert. While I was still wondering what operating system they run, one of the games crashed, and I asked a flight attendent to reboot it for me. And no, I wasn't trying to crash it, but it reminded me of an entry in Harald Welte's blog, who had a similar experience.

Like him, I had my camera ready and got a chance to take pictures of the boot process, including this one: 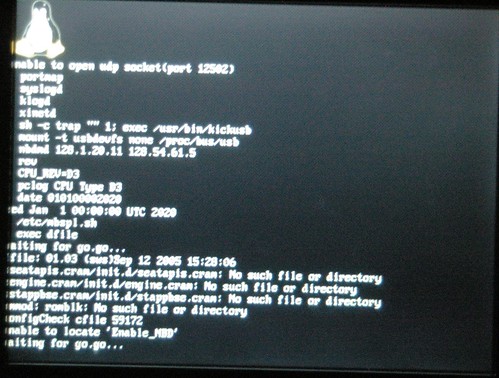 The next flight leaves in a few hours, and I'm trying to stay awake right now in order to adapt to the Sydney time zone.
Collapse